Review: Joe Gransden and Kenny Banks at The Velvet Note 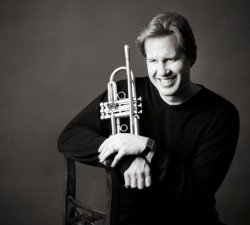 Perhaps you’ve noticed that on Valentine’s Day, everything is better in pairs.  Two people combining their love.  Two drinks sipped in unison, and two sets of eyes gazing ever-so-lovingly into one another’s.  Couple this with the musical pairing of Joe Gransden (trumpet, vox) and Kenny Banks (piano) and you have a most desirable night of delight.

Both established performers in their own right, they waste not one moment as they cruise through a spirited show.  Kenny Banks is easily one of the world’s most talented jazz pianists, softly caressing every ivory key with both precision and flair.  Most performers have one and not the other, but Kenny achieves both so easily, it is as if he is simply breathing or blinking.  Joe and Kenny–not only joyously, but with style–breeze through their opening number as the crowd radiates happiness and comfort, pretty standard fare at The Velvet Note.

It’s obvious that Joe and Kenny have a respectful working relationship.  They trade solos as often as they exchange jokes, before, during and after songs.  Jazz is a genre characterized by improvisation and freedom, but their performance is akin to coloring inside the lines, but with every brushstroke, the lines dissipate until they disappear, leaving behind exploration on every other page.   Between extended musical arrangements, Joe and Kenny engage the audience, providing Abbott and Costello-style entertainment, which turns contemporary and reminiscent, leading the way to a timeless sound:  laughter. 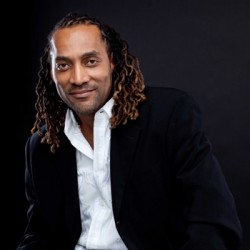 Joe is playing a rare 1951 Martin Committee, the same size and vintage instrument of legends Chet Baker and Miles Davis.  He makes it sound as sonically varied as the piano, dozens of sounds melodically explode from the instrument on every song.  He explains that he found this trumpet at a garage sale for a $150, a literal steal given its current market value.  Every note, every word, every detail is graciously absorbed by the audience.  The atmosphere is consistently relaxed, but the music transitions back and forth, from joy…to humor…to love.

Joe is an exceptional artist.  From his ten CD’s to his signature second-generation Sinatra voice, he is clearly the trumpeter you won’t soon forget.  Whether they are playing for Clint Eastwood, recording together on their upcoming release, or mesmerizing a full house at The Velvet Note, the duo of Joe Gransden and Kenny Banks provides the most intelligent, explorative, crowd-pleasing show, which is, quite frankly, jazz as it was intended to be.

This entry was posted on Friday, February 15th, 2013 at 6:47 pm and is filed under Uncategorized. You can follow any responses to this entry through the RSS 2.0 feed. Both comments and pings are currently closed.