The Front Door of The Velvet Note

Notes on the Secret Tradition of Gold Leafing

Gold Leaf is a traditional media which has been in practice some 5000 years, beginning in ancient India. Gold leaf is manufactured by hammering real gold into paper-thin sheets. It was widely used during the dynasties of Egypt, as well as in Eastern and Western Europe, evidenced by Byzantine icons and medieval altarpieces. It is still popularly used in religious art, in both the west and the east, due to the fact that its luminous hue and brilliance gives an enlightening appearance to almost any image with which it is paired. **

At The Velvet Note, the window lettering for our jazz club/acoustic living room is being designed and executed by artist William Bruce Mitchell of Squared Away Signs. We caught up with William during his weekend of lettering the Velvet Note door.
VN: You described the Gold Leaf process as an ancient art. What did you mean by that?
Mitchell: It’s a really old, traditional form of signage. The date of origin is debatable, but in terms of signage, its golden age was in the early 1900’s. At that time, it was used for signage for more affluent businesses. You still see it today, being used by banks and law offices.
The gold-leaf lettering technique is so specific that over time, it evolved into a borderline secretive technique, as those who knew it died off and were not replaced by a new generation. It kind of got forgotten over time as one master after another took the technique with him to the grave. Today, it’s very difficult to find a book in print that instructs you on the exact methods of how to do this. There is really only one way to do it and that’s the way it was done one hundred years ago.
VN: How long is it going to take you to complete the gold leaf window lettering for The Velvet Note?

Mitchell: Without any accelerated drying methods, it’s a three-day process. It’s basically a layering process and each step must have a 24-hour period to properly dry before the next step can begin. 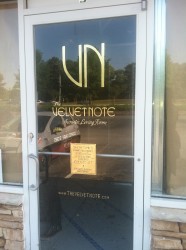 VN: As an artist, why did you decide to learn this technique?
Mitchell: I was already doing hand-painted signage. Every once in a while, someone would request gold leaf lettering and although I had heard about it, I didn’t actually know how to do it. Then, I had a client who had paid someone else to do gold leafing and the person used gold-paint instead. My client came to me and asked me to do it, and I told him I would learn how. It was actually my client who directed me to www.archive.org to start looking for old, out-of-print texts on this topic. After a month of reading countless old books, piece by piece, I was able to put together my own method, and that’s basically what you will see when you come through the front door.

VN: Is the gold leaf art a reflection of any of your personal values?
Mitchell: I would have to look at myself hard in the mirror to determine whether that was true, but overall, I really like things that are hand-done and handmade, and I really like old fashioned things. You don’t get more old-fashioned than gold leaf. I really like finding old practices and old skills, and bringing them back to a new audience in a new time period.
I have seen a big shift in the art world with pieces being created to look like the materials that were used to create them. I would liken it to the emergence of organic food—less processed and less mechanized, but of higher quality. The people who hire me to do this work are some of the same types of people who would choose organic food. It also definitely seems that there is a corresponding parallel to the economy. I’ve heard that when people are not at ease financially, they fall back more on their traditions. I think a lot of that is happening now because of the instability everyone feels. I think renewed popularity of gold leaf is a great example of how people look back to history and tradition as a sign of stability going forward.

This entry was posted on Saturday, May 5th, 2012 at 7:59 pm and is filed under Uncategorized. You can follow any responses to this entry through the RSS 2.0 feed. Both comments and pings are currently closed.