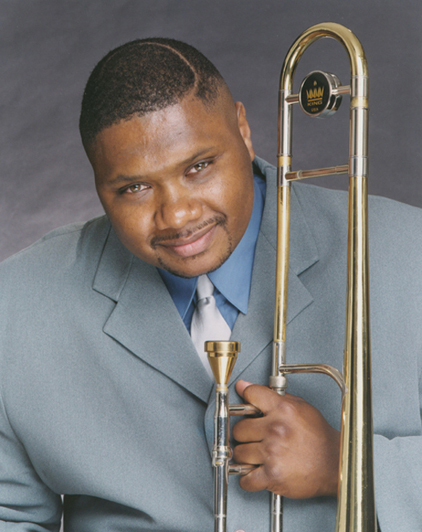 Musical ambassador and interpreter of America’s music, Wycliffe Gordon experiences an impressive career touring the world performing hard-swinging, straight-ahead jazz receiving great acclaim from audiences and critics alike. His unmatched modern mastery of the plunger mute and his exceptional technique and signature sound, has solidified Gordon a place in musical history known as one of the top trombonists of his generation. The Critics seem to agree. Wycliffe was named “Best in Trombone” by the Downbeat Critics Poll for 2012 and Jazz Journalists Association named him “Trombonist of the Year” again this year (2013) as well as previous years 2001, 2002, 2006, 2007, 2008, 2011 and 2012. He is a past recipient of the ASCAP Foundation Vanguard Award, among others.

In addition to an extremely successful solo career, Gordon tours regularly leading the Wycliffe Gordon Quartet, headlining at legendary jazz venues and performing arts centers throughout the world. Gordon is a former veteran member of the Wynton Marsalis Septet, Lincoln Center Jazz Orchestra and has been a featured guest artist on Billy Taylor’s “Jazz at the Kennedy Center” Series. Gordonʼs extensive performance experience includes work with many of the most renowned jazz performers of the past and present. His “Jazz a la Carte” show, which debuted at the Apollo Theater, was named one of the “top five best moments in jazz” for the year 2011 by The Wall Street Journal.

Wycliffe is fresh off of his unprecedented residency at Dizzy’s Club Coca-Cola with the legendary nine-time GRAMMY® Award and Pulitzer Prize winner Wynton Marsalis’ Septet.