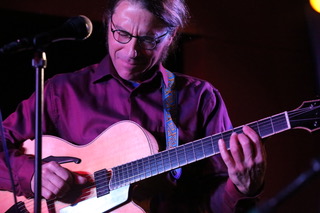 Tony Richards is a Chicago based guitarist, writer and arranger who tells delicious musical stories through his instrument.  Tony plays a variety of styles with his roots based in jazz. He has played with many fine artists such as Paul Hamilton, Roddy Ellias, Matt Warnock, Phil Angotti, Anna Fermin, Patrick Gemkow, Lou Hallwas and Josefina Asconapé – to name a few.