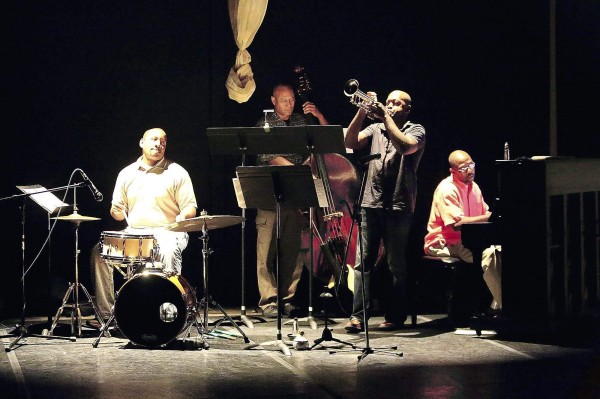 Thad Wilson’s Music is in one word: Authentic.

Thad was born in Fort Dix, New Jersey, however, his musical life started as a child living in Montgomery, Alabama.  At the age of twelve, neighbors could see (and hear) him on his front lawn practicing Taps on his trumpet until dark.

At the age of fifteen, he moved back to New Jersey where he graduated from Elizabeth High School and was quickly recognized for his talent.  He was awarded the All-American High School Music Award and a place in New Jersey’s All-State Jazz Ensemble. Thad was now en route to majoring in Music Education at New Jersey City University.  After college, he studied privately with Jimmy Owens, former member of Dizzy Gillespie’s Big Band, and it was Jimmy who gave Thad a glimpse into the life of a professional jazz musician.  Thad spent many nights in NYC, playing at jam sessions at the Village Door, Village Gate, Blue Note, Visiones,Smalls, and attending every performance he could get to on the subway.  He played with many of the greats such as James Moody, Benny Golson, Arnie Lawrence, Cecil Bridgewater, Vanessa Ruben, Ted Curson, and many others.

While in New York, Thad was a member of Charlie Persip’s Super Band. Realizing how talented-saturated the New York City scene was, Thad relocated to Atlanta, Georgia. There he met Johnny Oneal, Joe Jennings, Grant Reed and numerous other great musicians that laid the foundation for his development as a jazz professional. While in Atlanta, Thad was also working with some of the leading producers in the R&B and Hip-Hop genres. Artists like Khalfani and producer Rico Wade used Thad’s trumpet for many tracks and live shows.

These experiences led to Thad touring the world as a trumpeter and guest artist. His worldwide appearances included Moscow and St. Petersburg, Russia; Paris, France; Antigua, Guatemala; Puebla and Mexico City, Mexico; the D.C. Jazz Festival; Atlanta Jazz Festival, the New Orleans Jazz Festival and many other cities around the world. In 2003, Thad’s later writings would include filmscore composing and more expanded musical projects. Thad performed his original suite, Reflections on Romare, at the National Gallery of Art’s Romare Bearden exhibition opening in 2005.  In 2006 and 2007, he served as Program Director for The National Gallery of Art’s Jazz in the Garden summer concert series.

In 2008, Thad went on the road with the musical production, Ella, which chronicled the life and times of Ella Fitzgerald. He played the role of Donnie and was featured in the play performing a musical impression of Louis Armstrong.