Refreshing and beautiful are how many have described the voice and persona of Tatiana “LadyMay” Mayfield, a jazz vocalist, musician, and educator from Fort Worth, Texas. “LadyMay” (as she has been named) has been singing and playing jazz music since the tender age of thirteen. Since then, she has performed in various venues and festivals throughout the U.S., received rave reviews from listeners, and numerous awards. 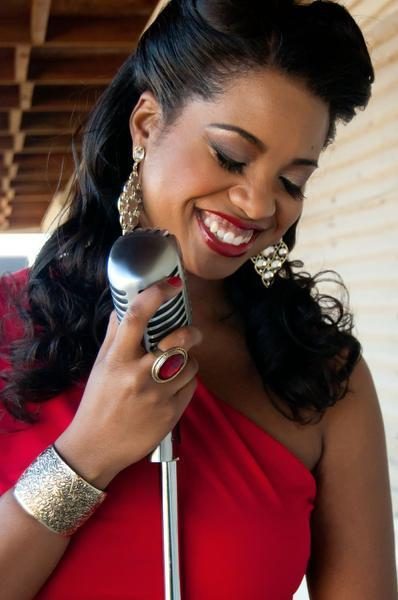 In October of 2010, she was chosen as one of the twelve semi-finalists to compete in the prestigious Thelonious Monk International Jazz Vocals Competition that was held in Washington, D.C. She performed before a panel of legendary jazz vocalists that included Al Jarreau, Dianne Reeves, Patti Austin, Dee Dee Bridgewater, and Kurt Elling. She has opened for several well-known artists such as Kirk Whalum, Randy Brecker, Dave Valentin, Bobbi Humphrey, and The Main Ingredient. She has also appeared on WFAA’s “Good Morning Texas” television show four times since 2011.

She has recorded two albums, From All Directions (2009) and A Portrait Of LadyMay (2012). The first album From All Directions was recorded while she was still attending the University of North Texas, where she received her degree in Jazz Studies. Jazz journalist Scott Yanow described her voice on her debut album From All Directions (2009) as “attractive” with “excellent elocution” and a “joyful spirit”. On her latest album A Portrait Of LadyMay (2012), Harvey Siders, former writer of JazzTimes Magazine, describes her intonation as “flawless” and her scatting “as natural as breathing.” In addition to her vocal skills, she plays piano, trombone, composes, and teaches voice.

LadyMay’s appeal has also reached listeners abroad in the UK, Switzerland, Germany, France, Brazil, and Nigeria. Her music has been featured on several international radio stations such as “Solar Radio”, “Jazz FM”, “Tropical FM”, and “Premier Gospel Radio” in the UK, “RJM Radio” in France, and “Smooth 98.1” in Nigeria. In November 2012, her song “Real” from A Portrait Of LadyMay reached #1 on the “UK Soul Chart” after working its way up for 4 weeks. In July of 2013, she completed her first tour (LadyMay In The UK) to London where she was widely received on radio appearances, as well as at some of their top performance venues such as Ronnie Scott’s, Pizza Express in Soho, and the Flyover Portobello.

First show is SOLD OUT.  Purchase 9:30 seats below: