Guitarist Steve Rieck moved to Atlanta in 1993 after graduating from the Berklee College of Music. As a performing musician, he’s worked with a variety of bands including the Northside Trio, many of 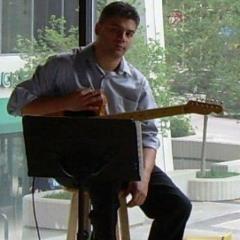 Atlanta’s best party bands and his original group “Redshift” and many others. He’s toured throughout the southeast and performed at the Atlanta Dogwood Festival and the Boston International Folk Festival. His studio recordings have included session work for CNN, UPS, ACOG and dozens of other corporate clients and artists. He’s also produced and engineered several albums for local Atlanta bands and has received songwriting awards from Billboard magazine. As an educator, Steve is the performance director and a member of the guitar faculty at the Atlanta Institute of Music teaching classes in Harmony, Reading and Performance. In addition to teaching classes at AIMM, he’s maintained a full schedule of students for twenty years. He recently helped found and create the majority of content for “songmaster.com” where he worked with Alex Lifeson, Scotty Moore and many others. His Songmaster instructional videos received Apple’s “Best of 2008” award, have been downloaded by millions worldwide and have reached iTunes #1 Music podcast for several weeks. In 2011, he published his first book “Fretboard Evolution” A Guitarist’s Guide to Harmony.