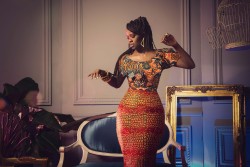 Acclaimed East African vocalist & songwriter Somi weaves jazz and African music into her socially-conscious and deeply poetic body of work that The New York Times hails as “both serious and seductive.” Her new album “The Lagos Music Salon” (Sony Music/OKeh) is inspired by an 18-month sabbatical in Lagos, Nigeria.  The album, which debuted at #1 on US Jazz Charts, features special guests Angelique Kidjo, Common, and Ambrose Akinmusire.  It is also the highly anticipated follow up to her last studio album “If The Rains Come First” which debuted at #2 on the Billboard World Music Chart and featured Hugh Masekela, Somi’s long-time mentor.

Also acknowledged as an arts scholar, Somi is also a TED Senior Fellow and currently an Artist-in-Residence at both UCLA’s Center for the Art of Performance and the Robert Rauschenburg Foundation.  Last year, Secretary General Ban Ki-Moon invited Somi to perform at the United Nations’ General Assembly.  In her heart of hearts, she is an East African girl who loves family, poetry, and freedom.