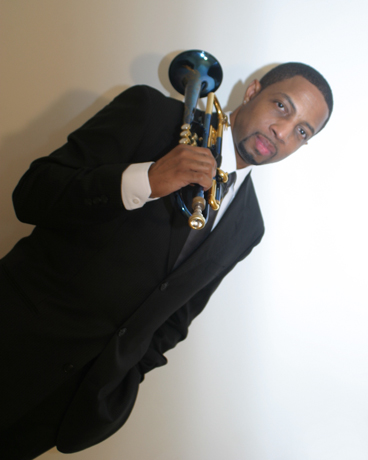 He is as charismatic as his music is captivating. Critics have aptly named him a composer, educator, musician, conductor and performing artist. His name, Melvin Maurice Miller. Born and raised in one of the largest cities historically known for great jazz and jazz greats, Chicago, Illinois – it’s no small wonder that music would become his life’s passion.

The sound of his horn and the style with which he performs comes from a variety of influences. He has learned from listening to many of the great masters. His sound: Louis Armstrong, Miles Davis, Dizzy Gillespie, Lee Morgan, Doc Severinsen, Freddie Hubbard, Wynton Marsalis. His phrasing: the vocals of Sarah Vaughn , Nancy Wilson and Ella Fitzgerald to name a few.

Choosing Atlanta, Georgia as his place of residence, Melvin’s preference is Adult Contemporary Jazz, He is a well-rounded musician, with the training to perform both classical and jazz. Melvin also held the position of principal trumpet with the African American Philharmonic Orchestra of Atlanta.

Melvin regularly performs the National Anthem for the Atlanta Falcons football games at The Georgia Dome and the Atlanta Hawks basketball games at Phillips Arena. Melvin wrote and performs the opening fanfare for the Trumpet Awards which airs on TV 1. He can be heard on releases by Alex Bugnon “Southern Living” and “Free.” Melvin has also appeared in Jet Magazine. The sound of Melvin’s trumpet can be heard in hit motion picture “Madea’s Family Reunion.” His first release was “A Christmas Gift” followed by “Innocent Bystander”, “Here’s To Life” “In The Moment” and his newest release “I Hope You Dance” which have all received rave reviews. Friends and fans celebrate him as a man of unimaginable creativity. He is affectionately called “young man with a horn,” a title bestowed on him by his mother.