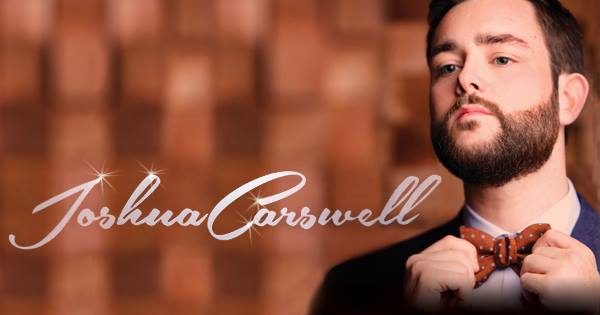 Joshua Carswell can’t remember a time when he wasn’t singing. A winner of the American Traditions Competition in Savannah, GA, one of the nation’s most prestigious vocal contests, and a graduate of Elon University, Joshua traces his musical inspiration to an unusual source. ‘When I was only three, I started singing specials in church. A lady in the congregation came to me afterward and said, “I will make you brownies if you will sing again.” So I did… again, and again, and again.’

Music was ever present in the Carswell home. ‘I would record musicals on our television and watch them over and over. I started subscribing to Turner Classic Movies magazine at the age of 12 just so I could record rare movie musicals!’, says Joshua. Disney soundtracks, crooner legends like Tony Bennett, pop innovators like Billy Joel and the Carpenters, and the songs of the Great American Songbook shaped his artistic sensibilities early on. ‘The excellence of those songwriters and performers is distinctively American. They inspire me to continue their legacy.’

That legacy is on stunning display in his self-titled debut, a diverse collection of Duke Ellington jazz, Hank Williams classics, pop originals, and European influenced standards. Produced by Alex Wolaver of the Annie Moses Band, the new album reaches across the artistic spectrum to craft an impressive musical presentation. ‘Josh loves a multiplicity of styles and genres,” says Alex, “and he has an extraordinary skill to interpret and perform all of them.”