You often hear things about younger jazz players, from critics typically, about the so-called “lions,” how they “carry the torch” and how they’re keeping the flame of tradition 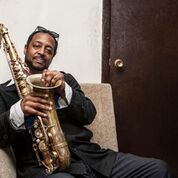 lit for future generations. Some are labeled with representing the past, the present and the future all at once. High praise, sure, but these accolades weigh them down, dog them with the most serious of expectations. All of a sudden each performance, each recording needs to resonate massively, or disappointment sets in, along with insinuations of being overrated.

This phenomenon of expectation is partly true for Eric Wyatt. While the Brooklyn-born-and-bred sax man (who is also Sonny Rollins’ godson) owns a solid berth along the continuum originally laid out by guys like Parker, Coltrane and Rollins, he is also his own player with his very own style.

He blows with power and precision, though he never precise enough to sacrifice heart. He can be raw and visceral, and he can carve his own route through the smoke and trees.  Throughout his career, Wyatt’s playing has been robust and inventive, heartfelt and poignant, both harmonic and melodic.

Look To the Sky, Wyatt’s debut for Whaling City Sound and his sixth recording overall, is magnificently realized, both instrumentally and emotionally. There are musical nods to his father (“Jolley Charlie”) and mother (“A Psalm for Phennie”),to Coltrane (“My

Favorite Things”) and a few other intimate touch-points, some original, a few written by his accompanist, Benito Gonzalez.  Wyatt is joined here by excellent progressive musicians, including the sublime Gonzalez.  Together, they have the ability to manipulate ballads, string out a jam in the very best sense, and keep their listeners rapt with extraordinary playing.  Wyatt’s vibe is filled with hope and dedication, reciprocity and passion. Best of all, he has managed to sidestep the weight of expectations by blazing his own trail. With every recording so far through his career, Wyatt has further flourished as his own man with his own artistry. Look to  the Sky is the man’s—and his band’s—finest and fullest record yet.