Come enjoy an evening of smooth jazz with the incomparable Eric Moore.  A native of Atlanta, Eric is an accomplished performer who has graced 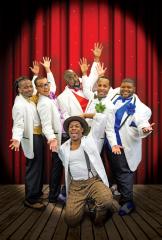 stages across the country and around the world. In this enchanting evening’s performance, Eric sings some of the greatest love songs every known, including those originally performed by the masters such as James Ingram, Ray Charles, Luther Vandross and Peabo Bryson.

In June, Eric Moore, Eugine Russel IV, Omar Madden, Sterling McClary, Brandin Jay, Trevor Perry, and Lawrence Flowers had the opportunity to work together in the hit musical ​FIVE GUYS NAMED MOE​ at Theatrical Outfit. There they created a sound like no other with musical direction from Renee S. Clark, while receiving rave reviews from critics as well as audiences.

Come out and see seven of the most talented men of Atlanta, GA, as they sing the classic hits by Louis Jordan.

First show at 7pm is SOLD OUT.  Purchase 9pm seats by calling 855.5.VELVET