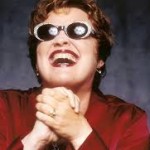 Diane Schuur grew up in suburban Seattle, Washington and was encouraged by both her parents to sing. She started singing when she was two-and-a-half, and by age nine, was getting professional gigs. She has said that as a small child she would often retreat to the closet to be alone with herself and sing.[1] Her early childhood music heroines were Sarah Vaughan and Dinah Washington. Schuur had her first gig at Tacoma’s Holiday Inn at age ten in which she sang country music. Attending the Washington State School for the Blind, she began performing original material, and starting at the young age of sixteen, revealed a distinctive voice and began performing. Her big break came when Stan Getz became positive about her work on hearing her sing “Amazing Grace” at legendary Monterey Jazz Festival in 1979, returning in ’88 and ’91. In 1982, Getz asked her to join him at a performance at the White House. Nancy Reagan invited her to perform again as a vocalist with the Count Basie Orchestra in 1987. Stan Getz later played on Schuur’s first three albums, Deedles (1984), Schuur Thing (1985 also with Jose Feliciano ) and Timeless (1988).[2]

In this once-in-a-lifetime, intimate performance, Diane will be perform with her quintet for a select Velvet Note audience, at 7:30pm and 9:30pm showtimes.  “Deedles” has just added a second performance night to her Alpharetta tour–Monday, April 7th!