Kenny Garrett is one of my favorite artists of all time. Here’s the reason why. | The Velvet Note
Home About Menu Shows & Ticketing Live Stream Board of Advisors BlogCast Contact Donate Gift Cards ☰

Kenny Garrett is one of my favorite artists of all time. Here’s the reason why. 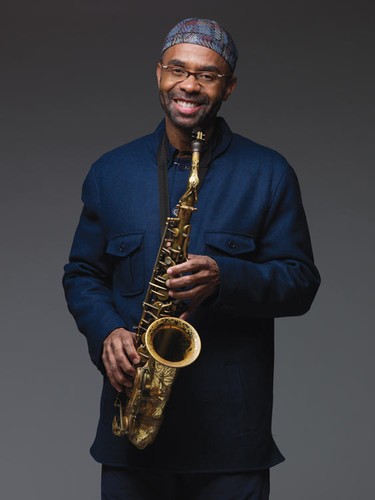 The Kenny Garrett Quintet performs this weekend at The Velvet Note, June 29-30, 2019, at 7:30pm and 9:30pm showtimes.  Vernell Brown on piano, Corcoran Holt on bass, Samuel Laviso on drums and Rudy Bird on percussion.

When Kenny Garrett performed at The Velvet Note for the first time a couple of years ago.  I must confess, I didn’t much like him.  I mean…I liked his music, but I didn’t like the fact that the second night of his shows didn’t sell out.  For a small club like ours, having empty seats for a superstar artist is rough for everyone involved.  To make matters worse, he and his quintet needed to park themselves in our city for a couple of days before moving on to the next stop on their tour, so we were making our club available to them for rehearsals.  Empty seats and extra rehearsals too?  Ugh.

Kenny had called me on a Tuesday morning, hours before his scheduled 2:00pm band rehearsal time.  He had a special request:  he wanted to get into the club early.  Not the whole band, just him.  Now this was just getting ridiculous.  I rolled my eyes in silent persecution, took a deep breath, and then assured him that I would open up that morning just for him.

If you’ve ever met Kenny Garrett, you know that his personality is…well…somewhat dry.  And quiet.  So, upon approach, there was no hug, no special sentiments of appreciation, barely a smile.  Not what I would do in that situation, but oh, well.  I had brought some work to do while sitting in the back of the room, waiting for this to be over.  He had his saxophone with him, as well as a large notebook.  He would play a few bars and then scribble in the notebook.  A few more, and then some more writing.  This went on for about an hour, at which time he asked, “Could you make some copies for me please?”

That moment was when the screaming in my head began.  I was tired, I was hungry, I was supposed to have a day off and hadn’t.   We didn’t have a copier at the time, so making five sets of collated copies required that I drive over to FedEx/Kinkos.   “Dude”, I thought. “My parents didn’t send me to a top-ten school in order to make copies for you!  I am the owner of this club, not your Girl Friday!”  I alternated between pinching my lips together and clamping down on my tongue.  I felt my head about to begin its roll-around on my neck.  Thankfully, no sound came out from between my lips.  “Certainly, Mr. Garrett,” I said.  “I will be right back.”

Down the street at Kinkos, I opened the notebook.  Inside were hand-written pages of a composition he had just written, or at least started.  I made the collated sets and then returned to the club.  And then, the most unexpected happened.

Kenny Garrett placed a copy of his sheet music at the piano and then proceeded to play the piano part as beautifully as any pianist I’ve ever heard.  As he played, he scrawled some notes on the piano copy of composition.

Then he got up and placed a copy on a stand in front of the upright bass.  He embraced the instrument that towered above him and proceeded to play it as beautifully as any bassist I’ve heard.  As he played, he scrawled some notes on the bass copy of the composition.

And then he did the same with the drums.  And then he went back to his saxophone.

I sat in the back of the room, shaking, my eyes welling with tears.  I began scolding myself.   “You are an arrogant fool, Tamara.  Most people in this world—including you–can barely master one thing.  This man in front of you has mastered every instrument on his stage, a fact that most people are completely unaware of, since they think of him only as a saxophonist.  He is so modest that he allows them to think just that.  He has given you the greatest, most inspiring gift—allowing you to see a part of him that almost no one knows about.  You have just had the privilege of witnessing him compose a piece of music that has—in part– been written from the perspective of every instrument that will perform it.  He has allowed you to witness the fact that he is as good at playing the instruments in his band as his band members are.  He trusted you with his hand written notes of an original composition.  You should be thanking him for the intimacy of this experience, not barking about you will and will not do.”

I got up and walked to the front of the room where he sat with his saxophone.  “Mr. Garrett, I am going next door to get some lunch.  May I get you something?”

As a sat in the sandwich shop and continued to beat myself up, members of his quintet arrived for rehearsal, one by one.  I thought about how true greatness and intrinsic power can enable us to be tender and quiet and vulnerable all at once.  By the time I returned to the club, the band sounded like a jazz symphony, coming together to play the song that Kenny had freshly composed.

This weekend, The Kenny Garrett Quintet will perform again at The Velvet Note.  If you’re one of the lucky few with tickets, we welcome you to our little club.  You are in for an extraordinary musical experience.  And I look forward to meeting you personally.  I will be the woman carrying Kenny’s water bottle, with a look of profound inspiration and joy on my face that reaches from ear to ear.

This entry was posted on Friday, September 22nd, 2017 at 5:18 pm and is filed under News. You can follow any responses to this entry through the RSS 2.0 feed. Both comments and pings are currently closed.