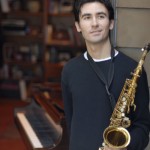 Marshall Isseks represents a new generation of jazz musicians:  young, bold, well-educated, unapologetic artists who firmly believe that the tradition of jazz has a rightful place at the modern-day music table.  “As jazz musicians, we are in the moment, a moment that will soon be lost.  I feel no compulsion to waste the moment by placating the masses.    This kind of music takes time and consideration to learn, but those are the things in life that have the best rewards.  Jazz is sexy.  It connects directly with people at the most human level, engaging their intellect and senses at once.  There’s nothing stale or stagnant about it.  At its best, it’s an honest, musical conversation between artists on stage that is always unique and never able to be fully replicated.  And yes, I believe that listening to jazz can change the world.”

Changing the world is something Marshall Isseks has thoughtfully considered.  Isseks grew up in the small town of Liberty, NY, five miles away from the site of the original Woodstock farm.  Liberty is known as hippie town, where a lot of the attendees of the epic Woodstock music event just stuck around and settled down.  The second son born to a college professor and an ophthalmologist, Isseks had an idyllic childhood full of support for both music and other pursuits.  “My grandmother was a piano teacher, and got me started,” he says.  “From there, I had the opportunity to study saxophone, and eventually travel into New York City and catch the vibe in venues such as Village Vanguard and The Iridium.  The New York jazz scene was intimidating, and at that age, I wasn’t mature enough to understand what jazz was about, but I knew I loved the energy of it, the fierceness, the honesty.  I think that’s a major role of musicians in society, to be very honest with ourselves and everyone else in every day conversation.  It makes a difference on the stage.”

Being honest with himself, Isseks decided that he didn’t yet have the chops to make it as a professional musician, so after graduating at the top of his high school class, he headed off to Atlanta’s Emory University to study….philosophy.  It was as a philosophy major that he encountered Gary Motley, head of jazz studies for Emory, who reignited his love for music as a career path.  Upon graduation and after a brief stint in the entertainment group of Carnival Cruise Lines, Marshall returned to Atlanta to make it in earnest as a jazz musician.  Today he divides his schedule between teaching music at Randolph Elementary School and private lessons, as well as pursuing a graduate degree in music at Georgia State University and performing for public and private events throughout the city.

Where does Marshall Isseks the philosopher intersect with Marshall Isseks the musician?  “One of the things we inquire about in philosophy is where ideas come from and when we, as a culture, start thinking one way versus another.  I think the artist often gets to the truth of that before the philosopher does.  I think the best ideas come from a few people getting together to speak their minds.  And that’s what jazz is too.  You have five different personalities on stage, conversing musically with each other.  For me, it is undeniable that the world be a better place if we listened to more jazz.”

Isseks will perform on February 9th at The Velvet Note in Alpharetta.  Heading into the Valentine’s Day season, his show will be loosely centered around the question of “What is this thing called Love?”  When asked about his own love life, he responds with a shy laugh.  “I am still a little shy, although I really do work hard not to be.  I live in Grant Park, Atlanta and I keep a busy schedule and I have a lot of friends.  I’m not seeing anyone at this moment, but I try to get out every night and find live music in places like Twains on Tuesdays, Elliott Street and Churchill Grounds.”  And what kind of woman would capture his attention?  “First and foremost, I look for her smile and her ability to carry on a conversation.  Beyond that, of course, I am attracted to a woman’s ambition, how she views the human ability to change the world.”

Showtimes are at 7:00pm and 9:00pm on Sunday, February 9th.  Tickets are available at http://thevelvetnote.com/marshall-isseks or by calling 855.5.VELVET.

This entry was posted on Tuesday, January 28th, 2014 at 5:30 pm and is filed under Uncategorized. You can follow any responses to this entry through the RSS 2.0 feed. Both comments and pings are currently closed.