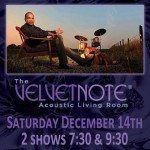 Grammy-award-winner Yonrico Scott is one of Atlanta’s most sought-after drummers. Tonight, he makes his debut as a headline artist at The Velvet Note with the official release of his new CD, “Quest of The Big Drum”.

This show celebrates the release of Yonrico’s new Jazz CD, “Quest of the Drum” and features Nic Rosen on piano and Joseph Patrick Moore on Bass. Personally signed by Mr. Scott himself, this CD makes an extraordinary holiday gift! Tickets on sale athttp://thevelvetnote.com/yonrico-scott or by calling 855.5.VELVET.

This entry was posted on Saturday, December 14th, 2013 at 2:19 pm and is filed under Uncategorized. You can follow any responses to this entry through the RSS 2.0 feed. Both comments and pings are currently closed.