Our Nation’s Cultural Diet and The Jeffrey Cox Quartet

I have been meaning to write this post for some time now.  I apologize for the delay.  By means of mea culpa, I can only offer that there are some things in life that you feel so deeply and so profoundly that you need to sit with them awhile….to fully grasp their meaning and connections, and to make sure that they stand the test of a few days of time. That and the fact that I’ve been distracted by the perfect snap of autumn weather here in Georgia.

In late August, I was in an extensive early morning interview with Dr. Gordon Vernick, Coordinator of Jazz Studies at Georgia State University. 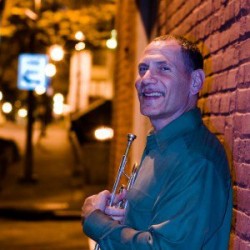 Now, Dr. Vernick is my absolute favorite kind of guy—grumpy.  Straight up—no chaser. He reminds me of my best buddies when I lived in New York City—the lawyers and doctors and judges I played poker with every Thursday night on Riverside Drive, which—coincidentally—is where Vernick was born and raised.  I learned a long time ago that the most cynical amongst us are those who actually care the most—care so much that it hurts.  Vernick definitely cares.  We quickly blew through all things superficial in his bio, and then we got to an interesting notion as we pondered why jazz has not been the popular choice on our music scene since the early 60’s.  Vernick said, “Popular music choices reflect the nation’s health, since pop music, by definition, appeals to the least common denominator.  100 years ago, we were a nation of active music makers, meaning that most people grew up learning how to play some kind of music.  When a culture is actively making music, you have healthier music in the cultural diet.  It’s like, when you don’t cook, you don’t appreciate real food.  It’s a tragedy that we don’t actively make music anymore, and that’s probably not going to change, just like most people aren’t going to go back to cooking their own food.  So now, we have to teach people how to listen to and appreciate music like jazz, because it’s not something they can distinguish with their palate.  As a nation, we are missing part of our diet.  ” Or something like that, you get point.  It was kind of dismal, depressing, actually, especially having just launched a venue that focuses on the best music delivered in the best possible way.  With iPods and XBoxs having replaced the clarinet, could future generations truly appreciate the difference that is The Velvet Note?

A few days later, I was driving down the road and I passed a member of the Guitar Hero Generation holding a sandwich board.  Not just any sandwich board, but the one in this photo. 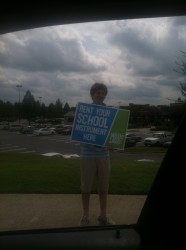 I was so surprised that I had to screech on my brakes and stop and ask if I could take a snapshot.  I mean, come on—we are all accustomed to “We Buy GOLD” or “Furniture Liquidation Sale” or even “Live Nude Girls!!” being hocked on the corner, but this was truly unusual.  Could it be that the dark clouds were parting and the rays of a culture of music makers were shining through?  And more importantly, would I live long enough to see these seeds come to fruition?

On the evening of Dr. Vernick’s show, quite a few college students poured in to hear their beloved jazz history professor blow his horn.  It was a phenomenal show—my bartender and service assistant (both of whom are trained musicians) declared that Vernick had set a new standard for our venue and that we should never settle for less.  At one point in the night, a young man of 6’4” towered over me.  “Tamara, meet Jeffrey Cox,” said my music director, Justin Varnes.  “ He’s in high school and his quartet is scheduled to perform here in a couple of months.”  Huh?!?  We’re booking high schoolers now?  Justin’s look said, “Just trust me.”  Well, it turns out that our Master Cox is the star pupil of—guess who?  Our charmingly-grumpy Dr. Vernick.  Oh….that’s a lot to live up to.  Enough said. 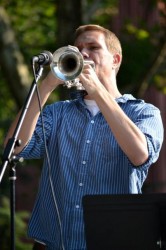 As the Cox Quartet show drew closer, the reservations started to swell and the buzz started to grow.  At times, I had to remind myself that they were still in high school, because their sense of organization and ability to sell tickets had outpaced most others we’ve booked, young and old.  And they had planned to perform both interpreted standards as well as original work, which is always of great interest to us.  Media called and asked if they could attend.  A record label was in the audience.  We were on the edge of our seats as we opened for the first time on Sunday evening to welcome The Jeffrey Cox Quartet.

Jeffrey Cox’s compositions and arrangements are simply beautiful.  They make you wonder how it is possible for someone his age to bring something so original to such a classic genre and its works.  Listen to Cox’s arrangement of Coltrane’s classic “Naima”.   The notion that this self-possessed 17-year-old sat down and put such innovative investment and confident thought into his musical craft fuels me with unapologetic hope for the future generations of jazz musicians.

On bass, Andrew Sommer performed like a highly-skilled jazz surgeon…anchoring the rhythm of the group while at the same time, showing an individual, meticulous reverence and attention to the detailed fingerwork on the bass strings that was quite remarkable.

And then there is Jordan Holiman.  When you think of a 17-year-old and a set of drums, images of the unruly, untamed, unbridled come to mind.  Nothing could be further from the truth here—Jordan Holiman possesses a control, a maturity and sensitivity to his role that is far beyond his years.  And apparently, he plays some other instruments quite well too, which probably accounts for his ability to both sense and integrate the disparate elements into a synchronized whole.

I don’t think that I can say enough about the group’s pianist, Andres Rovira.  Rovira and his family have visited our acoustic living room several times, and they seem to really understand and appreciate what we are trying to do here—which is to make this a place where you can truly hear music at its best.  Across all of those occasions combined, The Young Mr. Rovira possibly uttered four words that passed my eardrums.  Thus, when I heard that he was the pianist in this quartet and prodigy of the great Kevin Bales, it was difficult for me to put these seemingly contradictory images together.  Boy, was I wrong!  His interpretive artistry is exquisite, and I do mean “exquisite” in the true sense of the word.  While listening, you wonder how it is possible for such a quiet 16-year-old to play so confidently and beautifully, and at the same time, you wonder why it’s so rare to find in this world.  It is both rapturous and painful at the same time.

The Jeffrey Cox Quartet performed only one show at The Velvet Note, on that unassuming Sunday evening, packed from end-to-end by—mostly—people who knew people they knew.  For every person fortunate enough to be in attendance, there was a corresponding person who had called for reservations and had been unable to get in for this show.  So I declare, without hesitation, that if you ever get the precious opportunity to hear this group perform—either at our place or elsewhere, RUN, do not walk to the box office.  These four young men are a brilliant example of the future of music in this country—a future led by music makers who grew into music appreciators, who I am certain will grow into the kind of true artists who change the world.

This entry was posted on Tuesday, October 23rd, 2012 at 10:36 pm and is filed under Uncategorized. You can follow any responses to this entry through the RSS 2.0 feed. Both comments and pings are currently closed.