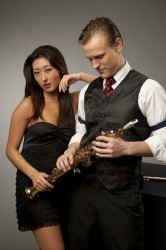 Ryan Whitehead was born in Warner Robins, GA.  This sleepy small town dominated by an Air Force base happens to be my birthpace too, although I didn’t grow up there as he did.  Nevertheless, I will take this rare opportunity to call him my “homeboy.”  Anyway, the first things you notice about Ryan are his eyes, which barely conceal the mischief crafted by a child whose intellect has outpaced his options for putting such mischief to constructive use.  Ryan Whitehead’s face is always asking, “How much can I get away with before you notice?”

By the age of 13, Ryan was an overweight, 220-pound adolescent with few friends and a severely overactive personality.  He decided to make some dramatic changes, including running, incorporating fresh vegetables into his diet, and music.  “My first week in middle school 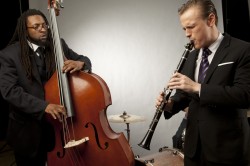 band, I was kicked out for disorderly conduct.  My dad suggested that I go back and apologize and make it work.  After that, I began practicing 6 hours a day, every day.  I fell in love with it.”  He credits his school band leaders for spending the time with him necessary to give him a great start as a young musician.

Whitehead had a brief stint at Kennesaw State University, studying under the great Sam Skelton, who he says taught him to “be on time and know your craft.”  Mismanagement of his new-found campus freedom cut his college career short, but helped propel him into the professional scene at a relatively young age and with an unusually focused ambition.  “This is all I do.  It’s the only thing I’m good at.  I make an effort to make sure people have a great time at my shows.” 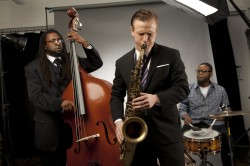 This will be Ryan’s first performance since his recent two-month Mediterranean tour with Norwegian Cruise Lines during which he played saxophone, clarinet and flute each night.  He describes his upcoming show as “classy” and “different” and as he talks, there’s a mischievous twinkle in his eye—he’s still trying to push the limits and see how much he can get away with.  “I know I could make a living just playing “Brick House”, but I want to do the music that resonates with my soul.”   Accompanying him will be two of his best friends–Mark Sims on bass and Jacob Deaton on guitar.  Hopefully, they will be behave themselves.  Or hopefully, they won’t.  Showtimes are Friday, October 26th at 7:30pm and 9:30pm and tickets are available at www.thevelvetnote.com/schedule-ticketing.