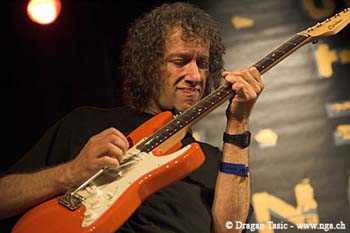 Scott Henderson is one of the finest jazz fusion guitar players to ever grace a stage or a recording. Henderson is a true virtuoso with one of the freshest, most highly-respected fusion approaches in the industry.  A bit of a recluse, it has been a while since Henderson has played the Atlanta market and he’s coming to The Velvet Note!

Scott formed Tribal Tech with bass player Gary Willis in 1984. Under the direction of Henderson and Willis,Tribal Tech became one of the most highly regarded fusion bands of the 1980s.  Henderson also recorded with violinist Jean-Luc Ponty, bassist Jeff Berlin and “Players”, and Weather Report‘s Joe Zawinul. Henderson first began receiving serious attention in six months as the original guitarist for the Chick Corea Elektric Band.