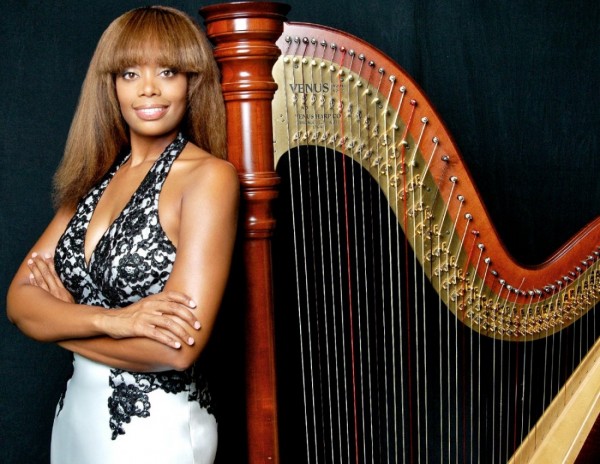 Lyrika Holmes is an internationally known harpist, singer, songwriter, composer, actress, teacher and co-owner of nonprofit arts school, “Artz for the Harp”. A classically trained harpist from St. Louis, MO, Lyrika has brought the harp into a futuristic world of electronic beats combined with R&B, jazz, pop, and classical elements to create a style all her own.

Lyrika has created several albums displaying her harp and vocal stylings including the smash hit “Attention” which received over 25,000 views on the video within its first week on YouTube and has been played worldwide in clubs and on radio stations as far as Cardiff, Wales. Lyrika also frequently performs in Asia and has also opened for several artists including: Kerri Hilson, Joe, Laura Izibor, and Phil Perry and has played alongside some of the best, including the Queen of Soul Aretha Franklin.

Recognized as a wedding harp singer, Lyrika has been featured on television stations throughout the southeast and the Midwest. She has also graced the pages of Essence Magazine, Modern Luxury Brides, Interior Design, Skirt Magazine, Parent Magazine, and St. Louis Education to name a few. She has also been featured as a harpist on the television series “The Originals” and frequently is cast to perform in shows filming in and around the Atlanta, GA area.