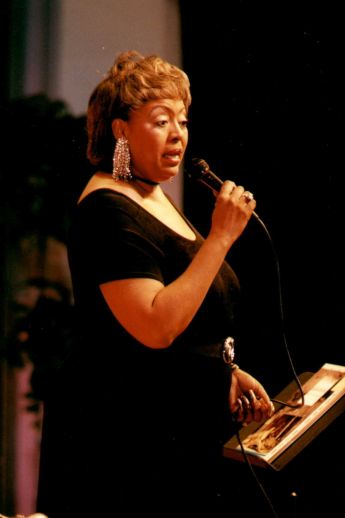 Are you Jonesing for a great jazz singer?  Linda Cole has sung professionally since she was 3 years old.  Her family group, “The Singing Coles” are a part of Illinois music history.  They began with religious songs, then added popular music to their programs.

The Cole family made their mark in the U.S. music scene.  Linda branched out into rhythm and blues.  She was known in the famous Detroit MoTown appearing with such groups as The Spinners, Count Basie, and many others.

Linda is acknowledged as having the “smoothest voice” in the business.  She is currently appearing in jazz spots, night clubs and restaurants throughout the Southeastern U.S.  She continues to mentor the young and choirs.

She was the opening act for David Benoit at Light Up Orlando-1991 and was special guest and recording artist for the “Yummies” cassette, recorded live at the 3rd Annual Jazz Benefit Show for the Brevard County Community Food Bank, sponsored by “Jack Simpson’s Jazz On The Beach”. She was headliner and opening act for Spyro Gyra, at the Ormond Beach “Jazzmatazz” ’93, Chuck Magione at Jazzmatazz ’94, Richard Elliott, Jazzmatazz ’95 and Acoustic Alchemy in ’96. Linda was featured vocalist with the U.S. Navy Orlando Jazz Big Band at Seminole Community College in Sanford, Florida; performed the National Anthem for the Rolex 400 24-Hour Race for NASCAR at the Daytona International Speedway, February, 1995 and the 1995 Spoleto Festival (headliner-Chick Corea) in Charleston, South Carolina.