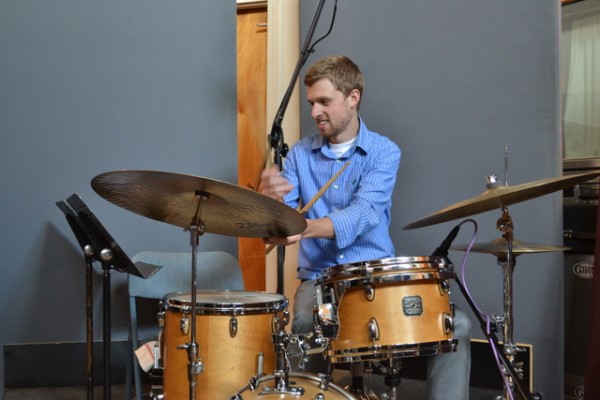 Justin Chesarek is all about swing. It’s what drives him, it’s what makes him strike drum heads with well-composed intensity, and it’s why some of the best jazz musicians in Atlanta keep him on call. Since arriving in Atlanta in August, 2008, Justin Chesarek, a transplant from rural Pennsylvania, has made quite a name for himself. He isn’t your average session drummer. While regularly playing gigs with Gary Motley, Laura Coyle, and Gordon Vernick, Justin also flexes his composing muscles with his group The Tree-O of Love, who maintain a regular Wednesday night gig at Churchill Grounds, Atlanta’s premier jazz club. Pulling diverse influences from jazz, classical, rock, world music, Justin writes and plays music with emotion, putting his artistry and talent in every note and beat he comes across. The end product is jazz — the virtuosity of Bebop, the soul and funkiness of the early days of Fusion, and a retro-modern mindset oozing with musicality and a beat that gets the inner ear thumpin’. “[Composing as a drummer] allows me to supply more of a concept of drums in melody. It gives me the opportunity to inject different rhythms and colors,” Justin said. Consorting with members of jazz royalty including Houston Person, Jerry Bergonzi, and Johnny O’Neal, just to name a few, Justin is regularly asked to perform with some of the biggest names around. A graduate of Slippery Rock University, Slippery Rock, Pa., Justin holds a Bachelors of Music in Education. Under the direction of Dr. Stephen Hawk, Justin completed a two-week European tour, making appearances at the Montreaux Jazz Festival and the North Sea Jazz Festival. Justin finished his Masters of Music in Jazz Studies program in May, 2010 at Georgia State University and currently teaches at Emory University and Kennesaw State University.