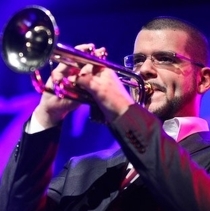 Josh Lawrence is a jazz trumpeter, composer and bandleader living in Philadelphia where he is on faculty at the University of the Arts and Drexel University.

Lawrence studied at the University of the Arts in Philadelphia and became a popular sideman on the neo-soul and jazz scenes. After graduation, he moved to the historic Sugar Hill neighborhood in Harlem where he was introduced to jazz masters Barry Harris, Frank Lacy, Jimmy Cobb, Lou Donaldson and Olu Dara. He co-founded the Uptown Brass at the Church of the Intercession in Washington Heights, worked as musical director for the band Harlem PsychaDelic and taught on faculty as brass instructor at Bronx Arts and Bronx Lab.

Today Josh Lawrence performs in clubs and festivals across Europe spreading the “gospel of American jazz”. His duo project with pianist Reggie Moore is receiving critical praise in Germany, his work with Adam Baldych’s Damage Control is garnering rave reviews throughout Poland and the Jazz 3 tours are establishing him as a bright new star on the international stage. He has just released his second album Roots and continues to teach students of all ages through master class programs.