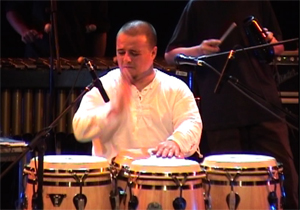 Gino Castillo is an Afro-Cuban jazz percussionist, singer and leader of SoulFunKubanized, a tribute to African-American music that influenced a change in modern Cuban music in the 1970s.

In 2007, Pearl became Gino’s exclusive sponsor, making him the first Latin American percussionist to appear in their regular e-newsletter, to be quickly followed by their promotion of his record release of “Ya Llegamos” and inclusion on Pearl’s website and catalogues. At the same time, since year 2003 Gino has maintained his cymbals sponsor with Sabian, becoming the first Ecuadorian musician to be sponsored by a worldwide brand.

Gino has served as the head Percussion teacher for the “Instituto de Musica Contemporanea” from Universidad San Fransisco de Quito and which is part of the Berklee College of Music Network. He also owns the “Centro de Percusion Latina Gino Castillo” which is part of the George Gershwin Conservatory in Quito, Ecuador, where he has been developing a modern method of learning based on his many years as a musician and teacher.