ALBARE is the nom de guerre of Albert Dadon, a virtuoso jazz guitarist with a strong melodic sense and a wealth of global influences. Born in Morocco and raised in Israel and France, Albare first worked as a musician in France, before emigrating to Australia at the age of 27. He is not only well known as a jazz musician but has maintained a highly successful career as one of Australia’s most prominent musician entrepreneurs. He is undoubtedly a major force in Australian jazz, having directed the Melbourne Jazz Festival for many years and as chairman of the Australian Jazz Awards. In 2008 he received the Order of Australia for his service to the Arts and Business. He currently lives in Melbourne, Australia. 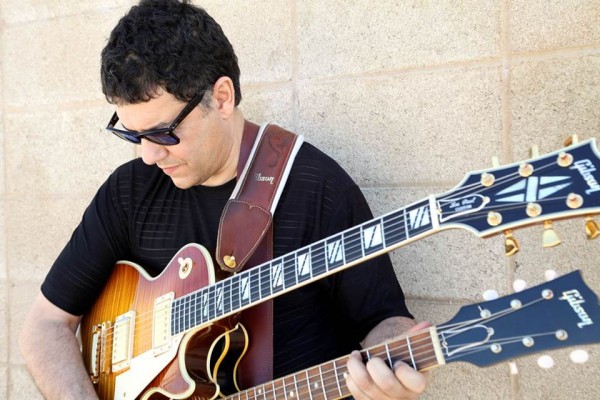 Endorsed by Gibson Guitars for over 20 years, Albare’s recording career began with a string of ‘acid jazz’ albums for Festival Records in the early 90s. Albare’s recording and performing has always worked in parallel with his work to promote Australian Jazz.

As the Director of the Melbourne International Jazz Festival he presented great artists such as such as Herbie Hancock, Chick Corea, Wayne Shorter and Gary Burton to name but a few. Albare is also the founder of the Australian Jazz ‘Bell’Awards (the Grammy equivalent for Jazz in Australia).

In early 2013 Albare went back into the same New York studio to record The Road Ahead with a new line up. This ensemble has proved to be a great setting for Albare’s melodic playing while continuing the international cosmopolitan theme. The band features the Italian Australian based pianist Phil Turcio, Cuban bassist Yunior Terry and Venezuelan drummer Pablo Bencid. They combine the fresh excitement of Long Way with a more sophisticated and interactive feeling within the band. This second recording for Enja Records remained in the US National Week Charts for 12 weeks.

Over the last 24 months Albare and his line ups have toured in 14 countries, twice the United States with a third tour scheduled to begin there on May 28, 2014.

An expert in martial arts, holding two Hapkido black belts, Albare used to be an avid tennis player and golfer until he was diagnosed with Stargardt (a rare eye disease which reduces the central vision). This impediment has definitely not affected Albare’s music however, nor his musicianship nor his Vision (the album “the Road Ahead” was entitled as such to emphasis that distinction). His boundless energy and zest for life keeps on taking him to many interesting places.

Albare is a Professor Fellow at the Art Faculty of Monash University in Melbourne.