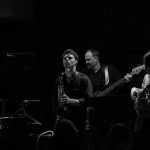 After beginning playing music at such a young age, William has since shared the stage with Amy Ray (of the Indigo Girls), Edwin McCain, Maria Howell, Wesley Cook, Sublime, Eddie Daniels, Nicholas Peyton, Bob Waschut, Jovino Santos Neto, Blair Crimmins & the Hookers, John Fedchock, Andy Martin (of Gordon Goodwin’s Big Phat Band), The Shadowboxers, and Kevin Mahogany. He has played Carnegie Hall, top clubs & concert halls across the United States (some of which are featured in Downbeat’s “100 Best Jazz Clubs in the World”), and international jazz festivals as both a sideman and featured with his own groups.  William is also forging his own compositional voice.  He has had multiple works debuted by Nelson Rangell, the Lamont Jazz Orchestra, and the ConArtists of Brisbane, Australia.  William currently performs locally and abroad with his group the Will Hollifield Band as well as with many others and teaches a private studio.

This showwill unveil, for the first time, Will’s original compositions written for vocal performance, and include vocalist Paige Hamilton.