Leonard Julien, III is a vocalist and balladeer with a tremendous vocal range. He is able to take you from Barry White to Peabo Bryson. Leonard found his way into the entertainment field while studying saxophone at Southern University under the direction of Alvin Battiste Jazz Ensemble. Leonard’s vocal talent was later discovered by Dr. Isaac Greggs, Band Director of Southern University Marching Band. 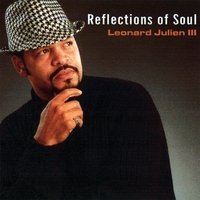 Leonard’s love for music has taken him beyond his native home of Louisiana and to the Atlanta metropolitan area, where he was later hired by Millie Jackson as a saxophonist and occasional background vocalist. While touring with Millie Jackson, Leonard received a personal call from his idol, Otis Williams of the Temptations, to sing the voice of David Ruffin in the mini series, “The Temptations”. Leonard has opened for the likes of Jeffrey Osborne, Tyrone Davis, and Ray Goodman and Brown just to name a few. Leonard can also be heard playing saxophone on Outkast’s hits, “The Whole World” and “I Like The Way You Move”. Leonard also can be heard on his family CD entitled “Reunion by Valsin”, which includes his famous cousin, Plas Johnson who played the theme (Pink Panther).