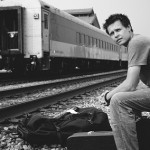 Immediately upon arrival, Kevin Rowe was invited to perform in several showcases, most notably; the BMI Symmetry Live showcase in Atlanta, GA. In the following months the barefoot British musician won the heart of his new city with his debut album‘10am’, which transformed the oft-overlooked moments in life into powerful ballads and foot-stomping rock melodies. Kevin’s distinctive smoky voice and
unforgettable falsetto had music critics and industry reviewers throwing out names like Bryan Adams, Joe Cocker and John Mayer. Atlanta Magazine branded him as “sensational”, while BBC labeled him a “great voice” and The Examiner noted him as a musician who “flat out owns the piano.” Invited to perform live on a local CBS station, Kevin charmed Atlantans with his smile-inducing lyrics and unadulterated love of music.

The summer of 2011 saw the founding of the Kevin Rowe Band, where Kevin completed his first American tour, with multiple TV, Radio and magazine appearances. In January 2012, Kevin was invited to perform at the prestigious 30A Songwriters Festival in Florida shortly after the release of his debut US single “Welcome To America.” In the late summer of 2012, Kevin released his sophomore US single ‘Everything I Was Made For’ during a live show in Atlanta GA after a live TV appearance to launch the single.