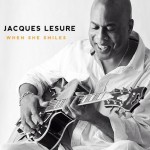 On December 19, 1961, guitarist Jacques Lesure began his journey; in search of the artistic truth and freedom of Jazz. Being born in Detroit Michigan to hard-working parents, Jacques was instantly immersed into a rich stew of influential musical icons. The music of Motown along with the echoes of jazz legends (like Kenny Burrell, Elvin, Thad and Hank Jones, Betty Carter, Donald Byrd, Geri Allen and Milt Jackson) and the spiritual foundation of Gospel greats like Rev. C.L. Franklin, Fred Hammond and The Winans have indeed impacted the abundance of aria that Jacques now shares with the world.

Mr. Lesure’s 30-year career consists of myriad performances, educational engagements and clinical presentations throughout the world. He selflessly serves as an ambassador of the art form he loves; working to create and nurture a love and appreciation for the tradition of Jazz music in everyone he encounters. Jacques believes that, as an original American art form, this Jazz music, birthed in the African-American culture, is the root and foundation of most of today’s music.

Currently a resident of Los Angeles, California, throughout his travels Mr. Lesure has performed with many great musical luminaries such as Kenny Burrell, Oscar Brown Jr., Jimmy Smith, Stanley Turrentine, Freddy Cole, Wynton Marsalis, George Benson, Jack McDuff, Les McCann, Carmen Lundy, Oliver Lake, and many others, rounding off an almost endless roll-call of artists that he has shared the stage with.

Jacques has collaborated in the creation of and has performed in countless theatrical renderings, produced cinematic scores and other mass media/television projects over the years. He is very active in and has a firm belief in working in the community and mentors many of today’s up and coming musicians in the greater Los Angeles area.

His weekly “No Nonsense Jam Session” is a musical platform for the seasoned musician as well as a springboard for students at the collegiate and preparatory levels. Every venue he performs in is filled with those who love and support the Jazz art form.

As the Musical Director for the Living Legends Foundation (a foundation that recognizes and honors legends in music) and a member of the African-American Jazz Caucus, Jacques strives to make Jazz accessible for generations to come. Jacques is a national adjudicator, serving as a diplomat for student competitions across the nation. Mr. Lesure also proudly serves as an Artist Teacher for the Thelonious Monk Institute, Make Music LA, and The Dolo Coker Jazz Foundation.

Jacques Lesure offers musical entertainment, enrichment, empowerment and education through his live performances, social media and other outlets; providing individual and group lessons, lectures, and serving as a clinician.