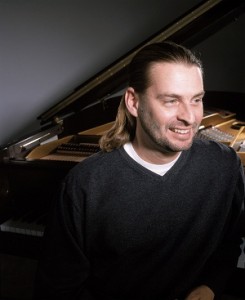 Known for innovative original compositions and unique renditions of the standard jazz repertoire, the group’s music has been described as a combination of, “talent, technique and taste” by JazzTimes Magazine. The Stolz program will feature “New Day Dawning.” This Hughes composition has been a favorite of the trio’s followers for many years. Another concert highlight will be a rendition of the theme from the hit television show, M*A*S*H. Hughes has long favored ballads from the Johnny Mandel Songbook. Music lovers can also anticipate hearing a little Charlie Parker, and “In the Mist” offers a taste of their upcoming album, due out this summer.

Hughes has a long career spanning two decades. He has performed, conducted and presented workshops worldwide and can be heard on over 30 recordings.  A former member of the US Army’s premier touring jazz ensemble, the Jazz Ambassadors, he has also performed with the Baltimore and Chicago Symphony Orchestras. He has played with jazz greats such as Arturo Sandoval, Roy Hargrove and Toots Thielemans and appeared at the Newport, Montreux, Nice and North Sea Jazz Festivals. His multi-faceted career includes conducting stints with the Cincinnati Pops and Los Angeles Philharmonic. Since 2004, Hughes has been the conductor of the Chesapeake Bay Community Band, one of the Mid-Shore’s premier music ensembles.